What was the first AWS service?

This question crops up from time to time, especially when there's a big AWS anniversary or around re:Invent. It's that time again, and the new AWS CEO (Adam Selipsky) said in his keynote that first came S3 and then EC2. And people responded with comments about that being wrong, etc.

What is that all about?

And why do I care enough to write a blog post? Great question! No idea 😏. It's pretty inconsequential stuff, just trivia (as in trivial). And a ridiculous use of my time. Let's dive in.

March 14th, 2006 is most often said to be the start of AWS. This is the day S3 was launched. I'll ignore that one of the announcements was labeled March 13th.

But, maybe it's July 16, 2002? About four years earlier. This press release is the first reference I can find. It's called "Amazon.com Web Services".

This section from the original S3 press release agrees:

But they weren't cloud computing services until years later. Those earlier services allowed developers to "incorporate many of the unique features of Amazon.com into their web sites -- free of charge".

Not what we think of when we say AWS today. Right? So we'll fast forward a bit.

The ".com" is gone. That "is" Amazon Web Services. But I still don't think this is what we're looking for: "you can access catalog data, create and populate an Amazon shopping cart, and even initiate the checkout process." AWS is a separate business unit from Amazon retail and it's focused on cloud computing services. That might have shared the exact name, but it wasn't "really" AWS.

That ends up being the page we want, though. The Wayback Machine doesn't have interim pages, but from a later 2005 page we get a nice list of announcements and that is where it starts to get interesting.

Here is a screenshot: 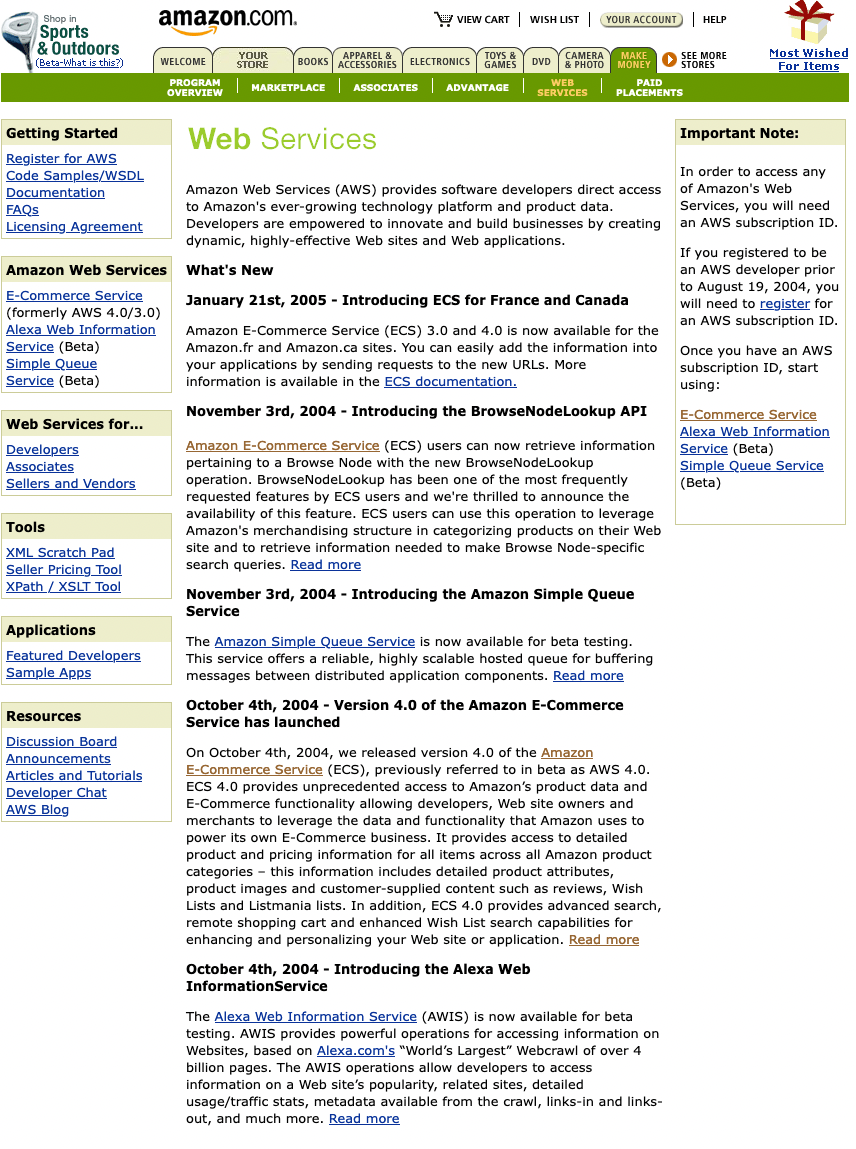 And there it is: SQS was launched in beta on November 3rd, 2004. This is the first thing that looks like cloud computing; it's an infrastructure-related service you'd use as a building block in your own software.

Another view of this time period is aws.typepad.com. Remember Typepad? It was like Blogger but built and hosted by the team that made Moveable Type, a publishing platform (all of this predates Wordpress). And, huh, it is still online (but not accepting new signups).

Anyhow, aws.typepad.com was the original AWS blog (@ Wayback Machine). And while it doesn't say Jeff Barr there, that first post was indeed written by him (see the new URL).

We learn there that SQS was free, had a cool scratchpad where you could try it out, and it could queue up a whopping 4000 items at a time (today you can queue an astronomical number of messages without making SQS even blink).

Back to that screenshot: ECS? That's not the ECS you probably know (Amazon Elastic Container Service). That ECS in the screenshot is from the e-commerce side.

I like the "previously referred to in beta as AWS 4.0" part, it makes things extra confusing 🙂.

ECS was also the only non-beta AWS service listed there for about a year. And it has roots that go back to July, 2002. When the container-based ECS service launched, they had to reckon with that naming conflict internally (tweet).

It also stayed on quite a while. A 2007 AWS blog post about an ECS release noted: "It is hard to believe, but we are coming up on the 5 year anniversary of the release of what was first called AWS, which later morphed into ECS. Per the AWS FAQ, the first release took place in July of 2002."

There's another beta launch in that screenshot and it's even earlier than SQS. On October 4th, 2004, Alexa Web Information Service (AWIS) was announced. This lets you search the Alexa.com webcrawl data. Again, not really cloud computing related.

But AWIS is notable because it's a current AWS service and on top of that it came out of beta on October 10, 2005, before the S3 launch 🤔.

You won't find it in today's service lists, but there it is. There's a developer guide and everything. You need an AWS account to use it and it's billed by the request. To make things extra strange, it's also an AWS Marketplace product you can subscribe to that's sold by Amazon Web Services with recent reviews (hmm).

So, the best contenders for "first AWS service" are:

A pedant relying simply on the name "Amazon Web Services" could (perhaps drunkenly) rant about the 2002-2004 years, but they're also probably going to be defending word definitions from 100 years ago that aren't in use anymore. You know this person and you're pretty sure they just like to argue. That wasn't the AWS we know today. ECS exited the umbrella eventually as it wasn't cloud computing related. But "Amazon Web Services" was the group, they were starting to do cloud related things, and ECS was the main, non-beta service it featured for quite some time.

AWIS is still an AWS service. It has a swank URL (aws.amazon.com/awis/). It went out of beta before S3. It uses AWS accounts and IAM. But it's not listed on the marketing pages or in the console. It has SimpleDB vibes. It's there and maybe, like SimpleDB, Amazon is just really good about keeping downplayed things running because there are still customers. I don't have any special knowledge about it; I'm sure the story is interesting.

But, unlike SimpleDB, AWIS is not a cloud computing service. AWIS defenders are going to have to work hard.

SQS is a good choice if you want to include beta launches. It's a cloud computing service. And one of the best ones.

S3 is a good choice because it did not launch as a beta. That was an awesome launch, too. I was working on grid/cloud computing things at the time and it was really interesting to everyone because of the "just bring your credit card" aspect. People in that world already knew the potential of sharing and leasing massive amounts of resources, but we were, rightly, obsessed with security and this was kind of wild.

I think you get to choose your camp. But I'll note up front: none of the camps get to say EC2 was second 😏.

Kind of a good answer. But this, like ECS, was a non-cloud related service that got mixed up in the transition to the AWS we know today. Unlike ECS, it seems to have stuck around. I'm sympathetic but not in this camp.

Sticking to cloud computing services, you still need to decide if you want beta or GA launches to count.

Did I miss something? Do you have a different take on it?